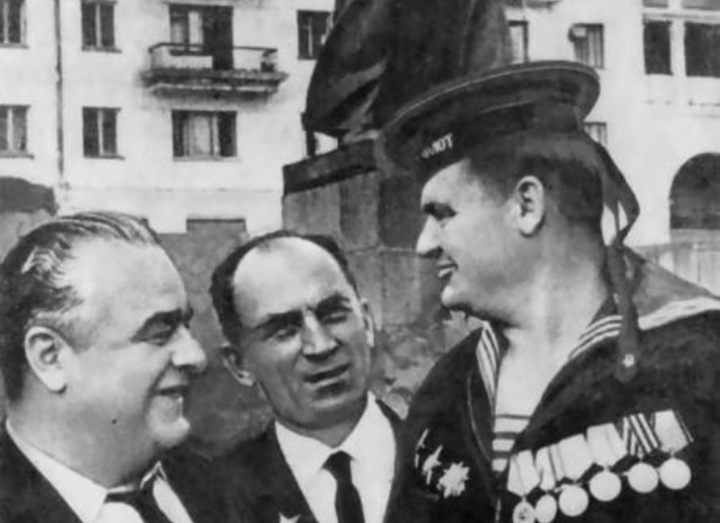 A not to be bombed

This case occurred on Small Earth. The sailor Vladimir Nikitovich Kayda was a part of a landing party of Caesar Kunnikov. Before war it served as the mechanic in the Dneprovsky flotilla, during defense of Odessa participated in a landing near Grigoryevkaya where got a severe wound, and after treatment was sent to marines.
Once Kayda appeared under the German bombardment. Diving bombers one by one purposefully bombed an entrenchment in which it was. And then Kayda decided that the German entrenchment as the German bombers won't bomb the positions will be the safest place where it is possible to overstay bombardment. That in an entrenchment there can be Germans, and all shops to its machine gun became empty long ago, our sailor counted as little significant circumstance. In youth, and 22-year-old Kayda counted up as youth years to service on fleet, he happened to kill on a bet a bull in fist blow. The bull was where it is more healthy than the average German.
The enemy entrenchment wasn't empty. In it there were two spotters. They on a handheld transceiver directed it Yunkersa. One of them from surprise didn't manage to make anything. Kayda punched it directly a helmet, and a steel helmet cut out to it a skull. Other German reached for the machine gun and already managed to remove it from a safety lock and to delay a lock, but here received blow under a chin. Cervical vertebras crackled, and the second German dead fell to an entrenchment bottom.
Kayda felt the owner of an entrenchment. Took out documents from pockets of the killed. Perhaps will be useful in a staff. At one Hitlerite on a breast the iron cross and a medal, at another only one medal were pinned. Removed them and put in a pocket.
At both Hitlerites on belts flasks hung. Kayda unfastened one, unscrewed a cover and tried. There was a wine. It drained all flask. The second in which too there was a wine, fastened to the belt.
Bombardment abated. Having stopped receiving amendments on a handheld transceiver, pilots left on airfield. Behind an entrenchment tramping – our sailors was heard, having used a break in bombardment, decided to destroy spotters. Having put on a peakless cap a trunk of the machine gun, Kayda waved it over a brustver and cried: "Here the! ".