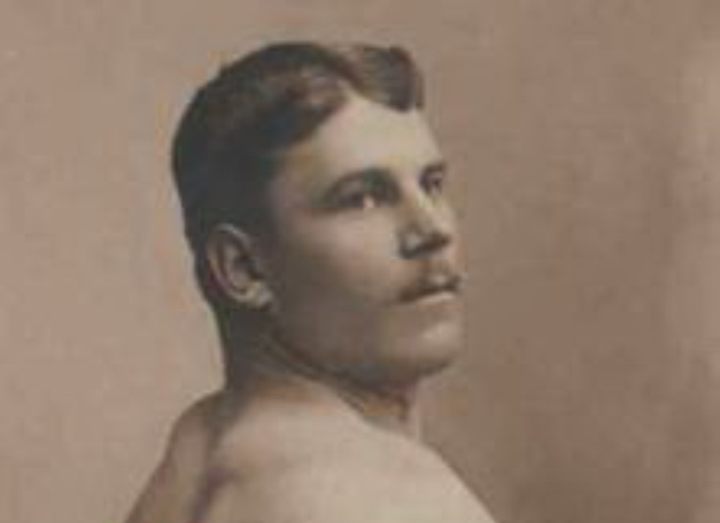 In 13 years Vasily Kutsenko left native Petrashivka in search of the best life, the best destiny, the happiness. After several years of wanderings, hard and wearisome work, the young man gained strength, grew up and will of a case got on the arena of the Odessa circus. The miracle didn't occur and the won Vasily already mentally didn't see himself the wrestler, but understood that in sports not only force is defining. And he was lucky. He met the teacher, the trainer and the mentor.

Thanks to a unique natural power, phenomenal wrestling abilities which were developed in it by the ancestor of wrestling in Imperial Russia trainer Vladislav Pitlyasinsky, in the past the wrestler, the head of school of physical development in Odessa, the guy from a simple country family reached tops of wrestling glory. It was recognized in Russia, Central Asia to Europe. On duels of wrestlers ranks, awards, even lives were at that time staked. The winner received everything. Step by step the young athlete went to receiving recognition.

In the world championship in 1909 in Kishinev wasn't equal to the Italian of the German origin Hans Dikman whom called the champion of champions. Believing in the invincibility, he put on a game all the merits and ranks (under laws of that time). When to it the turn to struggle with Kutsenko came, the public put on the favourite.

And there was a miracle. Invincible Dikman lay on both shovels! Audience grew dumb with surprise. Dikman demanded a revenge, but also in the second and in the third duels it again was won. Here already the public roughly applauded our fellow countryman. Having received in an award family Dikmnov a belt with gilding and the brilliants, returned all awards to the won. Having added only its surname to the.

Then new victories in Russia, in Europe, a draw si.poddubny followed.

For a victory over the Russian athlete A. Solovyov on circus posters already wrote Solovyov - Kutsenko V. Ya. (a surname Dikman cleaned from posters as it it wasn't pleasant to him). And work in circuses Minsk, Orenburg, Tashkent, Ashkhabad, Penza, Vologda, Makhachkala, etc. is farther. Its applause met in Europe.

Then the war, a difficult way home in native Petrashivka. Wounded, but not broken, until the end of the life I remained it is right to the native earth.

It is much written about a course of life and the outstanding Ukrainian. But interest to his extraordinary personality remains and today.

The regional specialist from Sobolevki Furdik Ivan Karpovich put a lot of effort to tell about Solovyov-Kutsenko destiny. I wrote about it, interviewed,  was on friendly terms with it.

Once Ivan Karpovich showed me the cutting which has turned yellow from time from any newspaper where Vasily Yakovlevich heads Teplitsky delegation at regional competitions. There was a wish to learn in more detail about this event.

Undertaking this business,  met the son, daughters of the well-known fellow countryman and we came to a conclusion that people have to know more about Vasiliye Yakovlevichaye.

According to the daughter Svetlana Vasilyevna in 1952 to them to the village from the area there arrived two (one of regional sports, another with a tie, probably, the party functionary) and began to persuade Vasily Yakovlevich to go to regional competitions. He agreed.

And not simply  headed delegation, and also  took part in running on 100 meters.

Svetlana Vasilyevna told how the father remembered this running. Heart almost jumped out of Vasily Yakovlevich's breast. From that breast which decorated numerous awards which were topped with the won Dikman's diamond belt, a gold cross presented for a victory the wife of the Italian king.

And  imagined, what strength of mind, what sports rage needed to be had that at the age of 66 years to defend honor of Teplitsky edge.

After long searches before me the Vinnitskaya Pravda newspaper for 1952 No. 184 of September 16.

In 1967 about Vasily Yakovlevich the movie was shot. To all Soviet Union - a newsreel "Daily news" No. 24, and in Ukraine "The Soviet sports" No. 4.

On these shots our hero, pupils and Petrashivki's inhabitants.

These film materials are found in archives of. Krasnogorsk (near Moscow, by means of our fellow countryman from page. Parched Shabatura Roman Vladimirovich) and Kiev (by means of the inhabitant of page Kostyukovk Sklyaruk Denis Vladimirovich). Today everyone can reconsider them.

One year prior to death in 1970 Vasily Yakovlevich addressed pupils and teachers of Teplitsky SPTU, Teplik's inhabitants.

As we see all the hard, but interesting life, he devoted to the native earth and people who on it live.