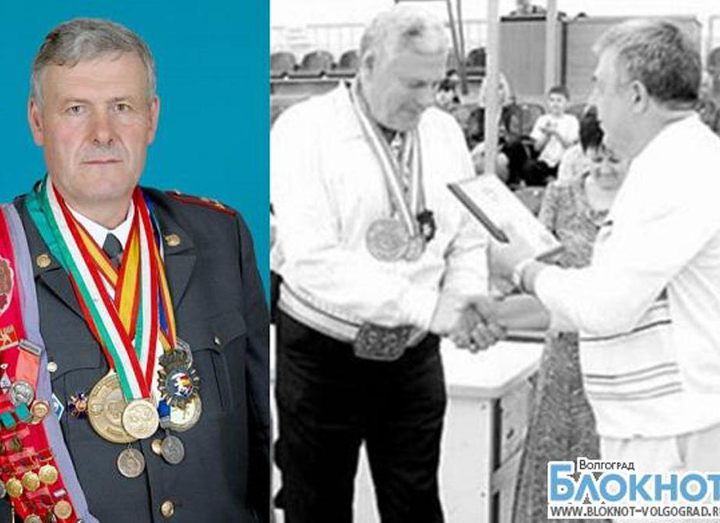 Vladimir Klivodenko — the unique athlete not only for our region, but, perhaps, and for all our huge country. It — the great wrestler.

It is awarded by the medals "For Faultless Service" of three degrees, the medal "For Merits in Physical Culture and Sport Development", a breastplate "For fidelity to duty".

- I was born in the Omsk region in the village and, having finished 8 classes, arrived in Omsk agricultural technical school. In technical school we spent sports evenings with demonstration of different types of sports. On one of them showed sambo wrestling. It very much was pleasant to me. There were to me then 16 years, and before I anywhere wasn't engaged.

Still when I studied in the 8th class, at competitions on volleyball the guy jumped to me on a hand and injured ligaments.  Rural doctors considered that it is a change, plastered and long kept a hand in one situation.  And later other doctor when removed plaster, told that the change isn't present, and simply a rupture of sheaves.  And after that a hand and it is possible to tell and still not absolutely became straight.  And here when I liked sambo wrestling, the hand at me then simply wasn't unbent, until the end of still degrees 20 didn't suffice.  When came to the trainer, he accepted me but when I told it about a hand, it grew dark at once, but told "all right go, be engaged".

I was growth 1.  86 also I weighed 86 kg, and on the first trainings kids, which on 60 kg started throwing me.  It naturally touched me, and I began to be engaged persistently.  Having been occupied with four months, the trainer carried me on the first competitions, from DSO "Crop", there was it in 1967.  Experience at me was very little, and by itself I there lost everything, but, nevertheless, got good experience.  And on trainings I became боротьthose to whom I lost before.

Having graduated from technical school, and the section was at it and masters there weren't, the trainer sent me to the sports society "Dynamo", there children of the master of sports and everything is natural much more seriously. Gradually in the weight I began to grow and as a result won superiority of the city. Then I served in army in SKA of the city of Novosibirsk, became the second prize-winner of the championship of Russia. Having screwed from army, married. There was a housing problem. In Omsk the apartment couldn't give, and my trainer agreed with Lipetsk. On the way to Lipetsk we stopped by in Volgograd. Here we met Victor Ivanovich Fedyaev. He suggested us to remain in Volgograd. My trainer Anatoly Alekseevich Hmelev and I remained in Volgograd. There was it in 1972.

Here I arrived in the higher investigative school, lived in "Dynamo" hostel, continued trainings.  Further I got on the USSR championship, there to the six got and to me paid attention.  Then in the press and everywhere conversations that will hold the first World Cup in the city of Tehran went.  To select candidates for the national team decided to hold a qualifying tournament.  It passed in the city of Baku, and the six of prize-winners of the Soviet Union there gathered.

When we flied there, the trainer told me that all rivals will fight for the permit on the World Cup, and you took the sixth place, fight simply, prove to be. I showed, on what is capable and won this tournament. As skilled masters there acted, my victory didn't make special impression on trainers of the national team of the union, and decided to make one more qualifying tournament in the city of Rybinsk. And I already self-assured again won against all and even won a prize for the best equipment in heavy weight. Me included in a national team of the Soviet Union, we passed a number of preparatory collecting and in September, 1973 went to the city of Tehran.

It was my first departure abroad and when we arrived to Tehran, I felt both air another, and people, and movement.  Now we have jams, and at that time they were there.  Everything was in a novelty, in wonder.

In general heavy weight — the most prestigious if the national team loses in all categories, but will win heavy weight, the country won. As I was the youngest in the team, some delegates of our national team stated doubts as the young guy will be able to win. Tried to change with me Ivan Yarygin who just won the free-style wrestling World Cup. And with Ivan Yarygin we together served in SKA Novosibirsk and knew each other perfectly. And when to it offered, he said "no, I won't cross to the companion the road". It pressed, but it the guy was rigid and refused. Threatened even to bring out of the national team, but it frankly arrived.

In my weight about 16 countries were declared and I had to struggle with four wrestlers. The first I struggled with the Iranian, the second was the Spaniard, then the Mongol and in the ending with the Bulgarian. The last fight was with bolgariny, and this is the representative of the socialist country, their delegation addressed to ours that I didn't win with a clear advantage that the Bulgarian wrestler too became a prize-winner. If I win with insignificant advantage or on points, he becomes the third prize-winner and if isn't present, the Iranian it advanced. I approached to the trainer, asked that such unclear is created. He told me: "You throw (clear-cut victory was 12 points), make points 8, and then we will look that there will be". I left, few times threw, and then resembled, resembled with it and all this ended. On points it remained is happy, and I became world champion.

You remember the feelings from that first medal?

— As I will remember when played our anthem, and it is very serious music, still goosebumps. It was touching, you leave, you award, even the tear welled up. The following 1974 USSR national team left on the European championship to Spain, I was already in it the oldest (smiles). Year earlier in the World Cup I still was the youngest, and now the most skilled.

Now prize-winners meet, and awards monetary give. And how before you the country met, than encouraged?

—  Me met routinely.  Then drove on the organizations.  The meeting was with staff of investigative school where to me presented certain prizes, then services were very much appreciated, just it to me and presented.  With power structures there were meetings, with KGB for example, on plants went, everywhere something gave.  In terms of money I received 1000 rubles for the World Cup, it when the Zhiguli car cost 5000 thousand rubles.

Your century in sambo as acting athlete was short?

— In sambo as the athlete I was occupied from 1967 to 1978 when me transferred to judo. And in general a sports experience at me 25 years.

From 1974 to 78 year you managed to speak at the international competitions still?

— In 1976 on Olympic Games. After the Olympic Games on our well-known trainer of the national team Andreev in the Sovetsky Sport newspaper I wrote a lampoon the champion of the Munich Olympic Games Sergey Novikov. I wrote that that carries out badly collecting, etc. As a result of trainer Andreev cleaned from the national team of the union. It arrived here to Volgograd and wanted that I performed at RSFSR championship competitions by day of militia that I proved to be. Novikov subsequently expelled. But it arrived here to the unsuccessful moment, I fell ill with flu. I was as early as young, 25 years of everything, and he finished me. As a result intense fight was, and I was traumatized, a meniscus. As a result it turned out so, as the Moscow Olympic Games of 1980 were covered. Quickly performed operation, in three months already I was on a carpet, prepared, but you understand, haste didn't lead to good, and on the Olympic Games I didn't get. Me transferred to judo, I got to the national team, was the prize-winner of the USSR championship several times, the champion of a cup of the union on judo. But here on the Olympic Games I couldn't get.

Each athlete has the crown reception. Whether there was at you that?

—  At me was them much, the arsenal was rich.  On sambo I especially was successful in a back footboard, it was continuous my reception through which I threw all.  The throw through the head with a shin subgarden, orchestra seats was very good.  Except these receptions, still the throw through a back from a knee was my reception on duty and very much to me helped.

And in life you had to apply wrestling skills?

— Naturally, I am the live person. When I worked as the deputy chief of a course by political part in VSSh with foreigners, the working day at us came to an end at 10-11 o'clock in the morning. The most interesting that we have such people if sees the person in a militia form, considers a duty, especially if he "under шафе" to approach and sort out the relations. It was necessary to meet with such people, as a result to deliver them in regional department of militia. There were, of course, cases, and different and. And in 1991 when bandits jumped out on some people and the rights to swing tried. But skills they remain skills …

Concerning inclusion of wrestling of sambo in the Olympic program. How, in your opinion, it is worth doing it or not?

—  Sambo is our national sport.  Naturally we have to fight for that sambo I entered into the Olympic program.  Everything depends on financing.  If include in the Olympic program, and will start financing, and schools will open skill increases, and structure will pick up that people were engaged in sambo.  I consider that the future for sambo.  After all in due time we had no judo, and there was a sambo, and sambo wrestlers went on judo and won, became champions of Europe, the world, etc.

That doesn't suffice to today's Volgograd sambo wrestlers to get in prize-winners of the World Cup or Europe?

— First the Volgograd sambo wrestlers don't have today attention because in the itself athlete won't appear never. There has to be a trainer who will take people and will train the athlete then he performed at first at the championship of Russia, then Europe and the world, etc. Therefore there has to be an attention to this sport. And we in Volgograd don't have it. The federation is, the chairman is, but only on enthusiasm of certain people and personally the chairman all this more or less keeps, only therefore for the present didn't forget sambo wrestling in Volgograd. I want to wish to young athletes of diligence, first of all, that they obeyed the trainer and fulfilled all their requirements. And then the result will come surely.